This article is a stub. You can help Agravity Boys Wiki by expanding it.

Male
"Grislow... Even when you're alone you'll be alright." -Lustro

Lustro has medium-length dark black hair, an eyepatch, and a scruffy beard. He wears a Hawaiian shirt, with a dark overcoat on top, and carries around a sheathed sword on his back.

After his wind-attribute is realised. He changes into a set of flashy wind armor, with many jewels on it. And a tiara-like headpiece.

Lustro was born from Grislow learning of Chris' true gender, causing him to think about penis' far more than usual. He blacked out and awoke in the Penis World where Lustro was there to greet him. Quickly explaining who he was, they immediately went to learn about the true power of the penis. Arriving at Penistopia, they were met by Chimere, the spirit of fire penis. Grislow, naturally confused about what that meant, had Lustro explain the eight penis-attributes. Then asking of Grislow to concentrate so they could discover his attribute. They discover Grislow's attribute is wind, Lustro then explains the advantages and disadvantages of wind-attribute penis. Afterward, he leads Grislow to Chernozem's home to further his learning. He later explains their connection with his right-eye. Once Chernozem finishes explaining the cosmic power of penis, the Penis World starts to collapse. He says his final goodbyes to Grislow, leaving him with some encouraging advice.

Later, in the final battle after Baba reveals his Omni-Attribute penis, Lustro shows up one last time to show his shock at their existence, after being drawn in by the incredible penis power.

Lustro is the human manifestation of Grislow's thoughts. During his time in the Penis World Lustro guides Grislow throughout, and helps him realise his true potential.

Not much is known about their relationship, however, sometime before the main story. Chernozem took Lustro's right eye with his high-level penis magic. 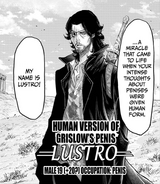 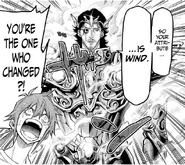 Lustro in his Wind Armor
Add a photo to this gallery

Retrieved from "https://agravity-boys.fandom.com/wiki/Lustro?oldid=1631"
Community content is available under CC-BY-SA unless otherwise noted.