Leader (by other members of Project Jörð)

O
Grislow Krakowski is an astronaut who arrived on α-Jumbro. He is the leader of Project Jörð. He wants to take over α-Jumbro.[1]

Grislow has messy shoulder length brown hair. He wears an eye piece over one eye. Grislow wears a skin-tight black jumpsuit like the rest of his group.

Grislow is egotistical, ambitious and somewhat unfriendly. He had wanted the glory of being the first human on α-Jumbro. Though denied of that honor, he still seeks to take control of the planet. He may think negatively of guys who care too much about girls, as he calls Baba, Geralt and Saga "whipped." Despite this, he became very infatuated with Chris, whom he mistook for a girl. Grislow has never had a girlfriend. He is prone to fits of gloating laughter.[1]

Krakowski is the name of a distinguished family in The Northern Alliance. Chris believes that Grislow may spent every day receiving elite training and being under a lot of pressure.[2]

Grislow was named Project Jörð's leader. The project was part of a colonization race by countries from Earth. He spent 20 years in cold sleep on the way to α-Jumbro.

Along his group, he arrived about a month after the Agravity Boys did. When he exited his ship, he initially gleefully laughed at the thought of being the first human to step foot on the new planet. However, this was not the case as he soon saw the Agravity Boys were waiting for them.

Grislow and other members of his group were greeted casually by Baba, Geralt and Saga, as those members of the Agravity Boys were disappointed that none of the new arrivals were girls.

When the Higher Being brought the Agravity Boys and Project Jörð to Alesta for a flirting contest, Grislow was unsuccessful picking up any girls. Along with Baba and Geralt, Grislow put on a revealing outfit and tried flirting with girls, but they were all arrested for obscenity. In prison, they got into a fight with the Glint Gang and were defeated, but were rescued by Captain Sache and his gang. Baba, Geralt and Grislow bonded with one another and the gang. One day before they were going to be released, Baba, Geralt and Grislow were forced into a prison break by Sache's gang and became wanted criminals. They returned to Alpha Jumbro.

Wanting to donate to Chris' livestreams, Grislow was manipulated by the Higher Being and ended up racking up a debt. Grislow used the money he donated to Chris to get Chris to wear a maid outfit on stream.

When the debt collectors attacked Grislow, Luo was angered and immediately defeated them. During the fight, one debt collector fired at Luo, but Grislow ran in front of Luo to protect him. Luo was shocked and upset over Grislow getting injured, but Chris reassured him that it was not life threatening.

Grislow has aspirations to take control of α-Jumbro, which may put him at odds with the Agravity Boys. He considered the cold reception to the arrival of his group by Baba, Geralt and Saga to be disrespectful. Because of their preoccupation with girls, Grislow thinks they are "whipped" and that he doesn't have to worry about them while he takes control over the planet. Grislow doesn't want his group to get too friendly to the Agravity Boys.[1]

Grislow bonded with Geralt and Baba when they were all arrested for obscenity on planet Alesta.

When Grislow first saw Chris, he became infatuated and thought of Chris as cute and his "destiny." Grislow has mistaken Chris for a girl. 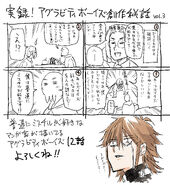 Retrieved from "https://agravity-boys.fandom.com/wiki/Grislow_Krakowski?oldid=1317"
Community content is available under CC-BY-SA unless otherwise noted.