Chapter eight of the manga.

After Chris was abducted, Baba, Geralt and Saga rush over to rescue him. They run in the direction of Chris' chip signal.

Geralt normally doesn't have enough endurance, but he is able to keep up with Baba and Saga because he took dopings boys, a steroid. The side effects are being bedridden for 5 days. Suddenly a boulder begins rolling at them. When it seems they can't hold back the boulder, Geralt takes 10 times the dosage of steroids. He immediately becomes very muscular and is able to fling the boulder away.

They reach the nest of the creatures that abducted Chris. Fearing the worst, they enter the nest. However, instead of being hurt by them, Chis is being treated like a king and having his name chanted by the jumbros, an intelligent native alpha Jumbro species.. Chris explains that after he had woken up in the nest, he healed a sick jumbro, causing this. Because he analyzed the space porn magazine given by the Higher Being, Geralt is able to understand the jumbro language. Geralt translates from the jumbros and says that they never intended to abduct Chris, just to welcome their new neighbors. The jumbro children had been scared of the ship and made a mess in it.

The Agravity Boys decide the jumbros are not a threat and establish a friendly relationship with hem. 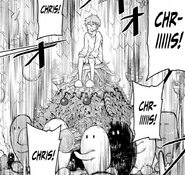 After healing a sick jumbro, Chris is treated royally. 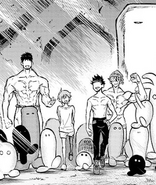 The Agravity Boys befriend the jumbro people.
Add a photo to this gallery
Retrieved from "https://agravity-boys.fandom.com/wiki/Chapter_8?oldid=902"
Community content is available under CC-BY-SA unless otherwise noted.