Chapter six of the first volume of the manga.

Two weeks after landing on alpha Jumbro, Geralt has come up with a rudimentary map of the area they landed in. To the disappointment of the rest of the Agravity Boys, Geralt has named the landing site "New Geralt City." They criticize Geralt by incorporating his name into it.

However, when they start their own suggestions for the landing site, they too incorporate their own names into them. To the shock of the rest of the Agravity Boys, Chris is included this, and he makes particularly bad name suggestions. The Agravity Boys recall that Chris has always been the stable and wise anchor of the group, but whenever Chris has a "brain fart," it throws off the balance.

They continue suggested ridiculous names, and in the end decide just to call the landing site a tentative "Point 001." 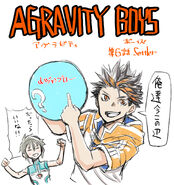 Chris's suggestion for the landing site. 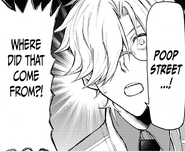 In an attempt to negate the bad suggestions so far, Geralt comes up with this name.
Add a photo to this gallery
Retrieved from "https://agravity-boys.fandom.com/wiki/Chapter_6?oldid=900"
Community content is available under CC-BY-SA unless otherwise noted.