Live to Tell the Tale

Chapter five of the first volume of the manga.

The Higher Being asks the Agravity Boys to each state what they desire. Using one of his tentacles, he manipulates Baba into selfishly desiring a girl, turning him against the rest of the boys. The Higher Being then declares that only one wish will be granted and relocates the boys to a battle arena atop the leaf of an enormous plant. The last one remaining on the leaf is to get his wish granted. The Higher Being assures that anyone who falls off the leaf will grabbed by the plant's tendrils and remain safe.

When Baba charges at Geralt, Saga protects him but is pushed off the leaf. Geralt then immediately falls off anyway as he dropped his glasses and lost his footing. Only Chris and Baba remain. Baba struggles with his desires and the manipulation from Higher Being. Chris encourages Baba not to lose to the Higher Being. Baba eventually breaks free of the Higher Being's influence and walks off the leaf on purpose, leaving Chris the victor by default. Since Chris had asked for data of viruses and germs on α-Jumbro that are harmful to humans, the Higher Being mentions that the tendrils of the enormous plant have valuable samples. 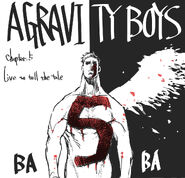 Chapter 5 art by Nakamura Atsushi, from his twitter.
Add a photo to this gallery
Retrieved from "https://agravity-boys.fandom.com/wiki/Chapter_5?oldid=899"
Community content is available under CC-BY-SA unless otherwise noted.