Chapter four of the first volume of the manga.

After installing the faster-than-light communicator with an antenna, the Agravity Boys discover a beautiful lake in which to bathe. Chris begins to unzip his shirt to take it off, but is stopped by Saga. The rest of the Agravity Boys are worried they will imagine the naked female body while looking at shirtless Chris, since Chris is so feminine looking. They attempt to stall Chris from entering the water. Chris initially thinks that they are trying to protect him since Chris was once bad at swimming. Chris scolds them for preventing him from bathing with them. However, the Agravity Boys feel bad about this, and let Chris into the water. While Chris plays with the water, the Agravity Boys look away. Chris then realized that they were afraid of being turned on by Chris' naked body. On the way back to the ship, Chris didn't speak a word. 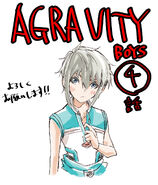 Chris takes his shirt off and plays in the water, with gag censor asking for fan mail to Nakamura Atsushi. 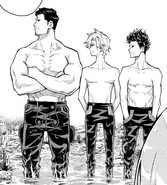 The Agravity Boys refuse to look at Chris' shirtless body because they might get turned on.
Add a photo to this gallery
Retrieved from "https://agravity-boys.fandom.com/wiki/Chapter_4?oldid=926"
Community content is available under CC-BY-SA unless otherwise noted.