Chapter three of the first volume of the manga.

The fifth day since landing on α-Jumbro, the Agravity Boys are foraging for food. Geralt goes off on his own into the forest for 30 minutes. He returns, treating his friends with a delicious cooked meal. He named the meal "α-Jumbro Style Fortune of the Forest Quulash Quartet." The meal is made with ingredients that Baba, Chris and Saga had found. Therefore, Geralt notes that couldn't have made the meal without them.

Suddenly, Geralt's stomach hurts. He had gotten food poisoning from all of the "trial runs" of the meal he had taste tested. Saga suggest that all he needs to do is "take a dump." However, Geralt says that he can't poop unless he's at his personal bathroom on the ship. Geralt is feeling so sick that he can't walk. He dramatically says that he's going to die.

Baba suddenly grabs and begins carrying Geralt. Geralt's friends are adamant about saving Geralt by bringing him back to the ship, even though it is several kilometers away.

Geralt recalls that back in their days at the academy, he was once friendless and considered unapproachable due to his genius. Baba, Chris and Saga invited Geralt to have lunch with them, and they became friends. Geralt thinks about they haven't changed - they're as good friends to him as ever.

Back to the present, the Agravity Boys encounter threatening dark creatures. Saga, wanting to protect the escape of his friends, tells them to go on without him. While Baba continues carrying Geralt to the ship, Chris refuses to leave Saga behind and prepares to fend off the creatures with him.

Baba and Geralt reach a cliff in front of the path back to the ship. Baba creates a bridge with his body, and tells Geralt to walk to the ship without him.

Later, Chris and Saga finally return back to the ship. They see a rough looking Baba sitting outside of the ship. Baba points to Geralt, who had gone to the bathroom. The Agravity Boys all cheer. 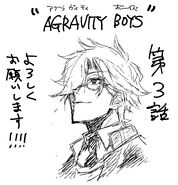 The delicious meal Geralt cooked from ingredients foraged by his friend on the planet. 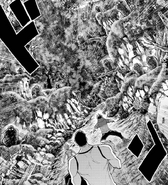 The dark creatures that appeared on the way to bringing Geralt back to the ship.
Add a photo to this gallery
Retrieved from "https://agravity-boys.fandom.com/wiki/Chapter_3?oldid=894"
Community content is available under CC-BY-SA unless otherwise noted.