They Don't Care About Us

Chapter sixteen of the manga.

Baba, Geralt and Grislow are in jail on planet Alesta after they had flirted with girls while wearing outlandish, revealing outfits. Their sentence is 3 days in jail. On Alpha Jumbro, Saga asks the Higher Being if he can just warp them out of jail, but the Higher Being asks if Saga would be okay if an alien had committed a crime on Earth and got away without punishment. Saga couldn't deny the Higher Being's logic.

In the prison on planet Alesta, Geralt is assigned to share a cell with a horned alien named Captain Sache. Sache asks if he can have the top bunk, to which Geralt agrees. Baba massages the back of a muscular alien he is sharing a cell with. Grislow shares a cell with a tentacle alien who can only repeat the words "Fushuru-Shuru."

The next day, Baba, Geralt and Grislow are talking with each other outside in the prison complex. A gang called the "Glint Gang," comprised of very short aliens, threaten the boys because the boys are in a spot the Glint Gang has claimed. The boys scoff at the short aliens and decide to take them on rather than appease them. Shortly after, the boys are defeated, with Geralt and Grislow crucified and Baba is tied up shibari-style.

Now proud of their prison life, Baba, Geralt and Grislow video call the rest of the humans on Alpha Jumbro, telling them they're looking forward to seeing them tomorrow when they're released. Baba, Geralt and Grislow appear to have bonded, as they are shown with tattoos on their hands that indicate a friendship between them. After the call, however, Sache and his gang force the boys into a prison break. The boys get out of prison and are now wanted criminals considered part of Sache's notorious pirate gang. The boys return to Alpha Jumbro wearing outlandish gang outfits. Arsh gets angry at Baba again, calling him an incubus, believing that Baba has corrupted Geralt again. The Higher Being informs everyone that Baba, Geralt and Grislow will likely be targeted by bounty hunters now. 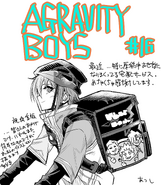 Art by Nakamura Atsushi, from his twitter.
Add a photo to this gallery
Retrieved from "https://agravity-boys.fandom.com/wiki/Chapter_16?oldid=914"
Community content is available under CC-BY-SA unless otherwise noted.