Chapter fifteen of the manga.

The battle of pickups on planet Alesta continues. Team Saga has 1 point and Team Grislow has several more points, largely due to the Arsh, Luo and especially Volk. Baba and Geralt put on flashy, revealing clothes they consider to be "hip" in order to turn things around for Team Saga. Grislow follows suit with similarly outlandish clothing. Arsh gets angry at Baba again, thinking Baba corrupted Geralt into wearing this kind of clothing.

Saga and Leeta escape the pursuit of the robots who tried to abduct Leeta. They were helped by some alien maids, who then offer Saga and Leeta some drinks. Chris and Leeta deliver the news to Saga that Baba, Geralt and Grislow all got arrested after they try to flirt with girls in their outfits. Saga mentions that one third of the last known earthlings are now arrested. The alien surprisedly ask if Saga just said the word "earth."

Later, Saga arrives with more than a hundred maids, increasing his team's points to 115. The maids are helping Saga because the Agravity Boys had helped Puffin, who had worked as a maid on planet Alesta. After Puffin had returned to her home planet through the help of the Agravity Boys, Puffin had told her coworkers on Alesta that she had been helped by earthlings. To repay the kindness the Agravity Boys had shown to Puffin, the maids decided to help Team Saga in the battle of pickups.

The Higher Being arrives and tells the humans that he was entertained by their performance in the game. He then declares that both teams are the winner. As a reward, he tells them that twenty years ago, Earth "fell." He says that there is only one way to save the earth - build a time machine. The parts of build this machine are all available on Alpha Jumbro, he says. 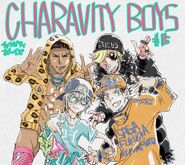 Art by Nakamura Atsushi, from his twitter.
Add a photo to this gallery
Retrieved from "https://agravity-boys.fandom.com/wiki/Chapter_15?oldid=913"
Community content is available under CC-BY-SA unless otherwise noted.