Chapter ten of the manga.

Geralt announces that a ship will soon be arriving on α-Jumbro. Baba and Saga think it's odd that a ship would be arriving so soon when the voyage was supposed to take 20 years. However, Geralt corrects them and says that 20 years has indeed passed. He hypothesizes that the black hole that transported them to the planet made them time travel 20 years into the future.

Baba, Geralt and Saga soon get excited over the possibility that the ship has girls and rush over to greet the new arrivals. Chris is elsewhere distributing medicine to the Jumbros.

Out from the ship, however, instead comes a man named Grislow Krakowski. Disappointed that he wasn't a girl, Baba, Geralt and Saga greet him casually, which annoys Grislow.

Next, more people begin exiting the ship, again raising the hopes of Baba, Geralt and Saga that there is a girl on board. However, more men come out of the ship: Arsh Jammwal, Luo Yinuo and Volk Kahveci. They too are greeted casually. Finally, one more figure begins exiting the ship - this time with a more feminine shape, exciting Baba, Geralt and Saga. However, it is just Leeta, an android.

Grislow realizes that the cool reception from Baba, Geralt and Saga is due to the fact that they wanted to see girls. He grins, called them whipped by their infatuation to girls, and says he won't have to be on his guard as he takes control over the planet.

Just then, Chris finally arrives and greets Grislow. Grislow immediately becomes infatuated with Chris and believes Chris to be his destiny. 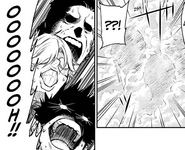 Baba, Geralt and Saga eagerly anticipating a girl to emerge from the new ship.

Grislow meets Chris and is smitten.
Add a photo to this gallery
Retrieved from "https://agravity-boys.fandom.com/wiki/Chapter_10?oldid=906"
Community content is available under CC-BY-SA unless otherwise noted.