Chapter one of the first volume of the manga.

In 2119 A.D[1], the Agravity Boys crash land on the earth-like planet, α-Jumbro. They initially celebrate the discovery of this new planet and the success of Project Hermes, but Saga mentions that they may be the last of humanity as Earth has been destroyed by nuclear war.

An entity known as the Higher Being appears before them and offers them the Genar-Diversion elixir, which allows for one person to change from man to woman or vice versa. Baba, Geralt and Saga begin flirting with the feminine Chris, hoping that Chris will be turned into a woman.

Chris refuses and the rest of the boys begin fighting over how the elixir should be used. Geralt mentions that a single female is not enough to repopulate humanity and they decide not to use the elixir. Saga throws out the elixir. However, when Baba, Geralt and Saga begin obsessing over the prospect of girls in other colony ships, Chris gets upset and goes back to his room. 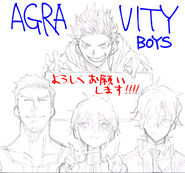 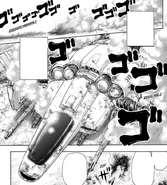 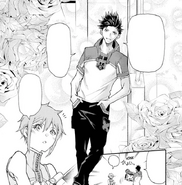 Saga flirts with Chris.
Add a photo to this gallery

Retrieved from "https://agravity-boys.fandom.com/wiki/Chapter_1?oldid=936"
Community content is available under CC-BY-SA unless otherwise noted.