Start a Wiki
This article is a stub. You can help Agravity Boys Wiki by expanding it.

A
Arsh is an astronaut and a member of Project Jörð.

Arsh has dark shoulder-length hair and dark skin. He has his ears pierced.

Arsh is rational and practical. The exception is when it comes to Geralt Zeman, as Arsh idolizes Geralt and tries to find any excuse to defend him.

When Arsh was young, he lived in a very poor region of his nation. However, his nation created a science program in order to compete with the Freedom Federation's top genius Geralt Zeman. Arsh was selected for this program, which lifted him out of poverty. Arsh believes he owes Geralt his life and happiness.

Later, Arsh was selected from Project Jörð. He spent 20 years in cold sleep on the way to α-Jumbro.

Along with rest of Project Jörð, he arrived about a month after the Agravity Boys did.

Arsh and other members of the group were greeted casually by Baba, Geralt and Saga, as those members of the Agravity Boys were disappointed that none of the new arrivals were girls.

Arsh did not greet the Agravity Boys when initially meeting them.

Arsh believes Baba is a meathead who corrupted Geralt by making Geralt care about women instead of just science.

Geralt is Arsh's academic hero. That is because Geralt inspired Arsh's nation to compete scientifically. Arsh's nation created a program that ended up lifting Arsh out of a life of poverty. Arsh believes that Geralt is Earth's greatest genius. Arsh believes that prior to being corrupted by Baba, Geralt had a pure scientific soul that didn't have any interest in females. Arsh will defend any peculiar action Geralt does as something with deeper philosophical or spiritual meaning. 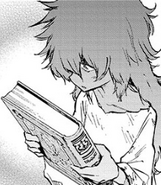 Young Arsh when he was living in poverty.

Chapter 13 title art.
Add a photo to this gallery
Retrieved from "https://agravity-boys.fandom.com/wiki/Arsh_Jammwal?oldid=1316"
Community content is available under CC-BY-SA unless otherwise noted.