Start a Wiki
This article is a stub. You can help Agravity Boys Wiki by expanding it.

The Agravity Boys is a group of orphaned young male astronauts who befriended each other at an astronaut academy on Earth. They've known each other since at least middle school.[1] They are from the Freedom Federation country.

Baba, Chris and Saga were raised together.[2] They became known by the nickname "Agravity Boys" due to their "wild and loose and unbound" behavior lacking common sense and defying "gravity itself."[3]

At some point before the events of Chapter 1, they were rewarded for off-planet exploration.[3]

They were chosen for "Project Hermes,"[3] a project seeking an inhabitable planet for humans. Two days after they launched into space for this project, Earth was destroyed by nuclear war.[4] The next day, their spaceship, the Litl Skeep, was sucked into a black hole that suddenly materialized, and they were transported just outside of the earth-like planet α-Jumbro.[5] In 2119 A.D[6], they crash landed on this newly discovered planet. Shortly after, they began being toyed with by the Higher Being.[7]

After more than two weeks[8] had passed since their arrival on the planet, they came into contact with the first known intelligent alien civilization on α-Jumbro, the Jumbros.[9] 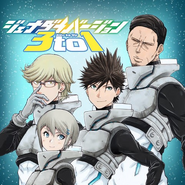 The version of the Agravity Boys in the one-shot Jennadai Version 3to1.
Add a photo to this gallery
Retrieved from "https://agravity-boys.fandom.com/wiki/Agravity_Boys_(Group)?oldid=723"
Community content is available under CC-BY-SA unless otherwise noted.